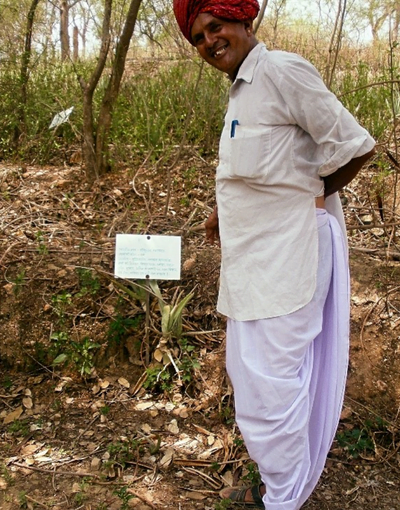 Bhagwan Lal, 64 years old, is one of the Master Gunis of JJVS. He started work with JJVS in 1989 when the revitalization of traditional systems of medicine first became an initiative of the NGO. He helped organize the first Guni health camps, has identified many additional traditional healers and worked to enhance his impact in the greater community. Bhagwan learned about traditional medicine from his father, who died at a young age before he was able to pass all of his knowledge to his son. At age 20, he started treating people with herbal balms and teas from his farm and the local jungle. He never has to buy any plants he used in his treatments and now treats 10-15 patients daily. Bhagwan specializes in arthritis, diabetes, and myotherapy – which he learned from visiting foreign myotherapists at JJVS. His treatments have been recognized by JJVS Ayurvedic doctors for their effectiveness, which has increased the larger communities’ trust in traditional medicine and widened his impact in his community. Thanks to JJVS, he is so well known that patients come from far away to be treated by him. He also treats patients at an Ayurvedic hospital in a nearby village.

Bhagwan Ji became a Guni because he saw that poor people cannot pay for treatment at hospitals and get into serious debt. Bhagwan Ji provides low-cost and free treatment for the poor of his community. He does not offer special treatment to his well-off patients, and he thinks it is very important to pass on ancestral knowledge about traditional medicine. His wife, sons and daughters have learned about traditional medicine from him,   The Gunis he now trains were previous patients of his who were so grateful for his treatment that it inspired them to give back to their communities in the same way. Bhagwan is equally inspired by JJVS as an organization and grateful for their support in his ancestral healing practice.