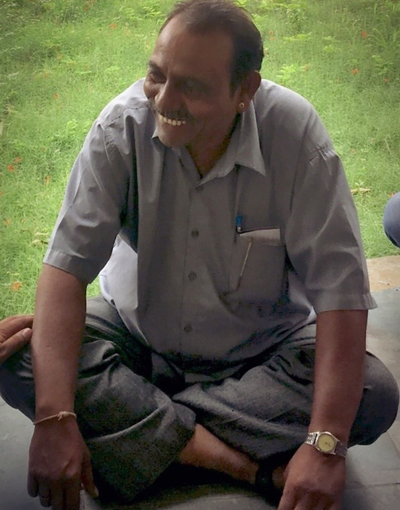 JJVS has in many ways been a pathfinder for Shanti Lal, providing opportunities to travel and new learn skills and then share them with others.

After working with JJVS for 7 years, he was able to go to Kerala in South India to learn about Myotherapy from an Australian myotherapist who was on-staff with JJVS at the time. It was a great experience, and he brought this new training back to the Gunis working with JJVS. Several years later, he went back to Kerala to learn about Panchkarma, and has taught Panchkarma therapy to many Gunis in Rajasthan through JJVS-organized health camps. He finds it very important to share his knowledge with others. If he suddenly dies, he does not want his skills to die with him. Shanti Lal has worked with JJVS for more than 25 years.

A man in his village was badly beaten up by a group of local boys. Shanti Lal treated him for 14 days. Fully recovered, the man felt very grateful for the treatment he received. He asked Shanti Lal if he could do anything to repay him, and he told him that it was his dream to have his own clinic so that he could treat more people. The man told him that he could open a clinic in the second part of his home. At the clinic, he and Babli Bai treat six patients daily, sometimes up to twelve. In the future, he and Babli Bai hope to build a second floor in the rural clinic so that they can provide accommodations for patients over-night. They also travel 70 kilometers to Udaipur every Saturday and Sunday to sell medicinal plants to patients in the city. The common health issues in the village include eczema, diarrhea, vomiting, bile and itching, but new diseases like hypertension, kidney stones and diabetes are increasing in prevalence. Food was always fresh and natural in the past, but now people are developing bad eating habits. In the cities, he has noticed that people have weaker immune systems, more chronic diseases such as diabetes and hypertension and lifestyle-related conditions such as joint pain, lower back pain, migraines, bodily stiffness and hemorrhoids. Many people in the city do not get their health issues checked out until it is too late due to their busy and stressful schedules, and take a longer time to recover due to their unhealthy eating and lifestyle habits.

Realizing the benefit of medicinal plants, he now tries to educate and change the mind-set of people toward naturopathic medicine. Many people in the village know about medicinal plants but those in the city have no knowledge of them and throw them away instead. People did not trust the Gunis at first, preferring allopathic doctors and spiritual healers. He feels that people do not always realize the amount of work that goes into becoming a skilled and knowledgeable Guni. Shanti Lal, like many other Gunis, does not want this healing art to die with their generation. He feels very happy to treat his patients and works as a Guni to give back to the people. He is currently trainings three males Gunis by watching them treat patients and taking them to the jungle to collect medicinal plants.