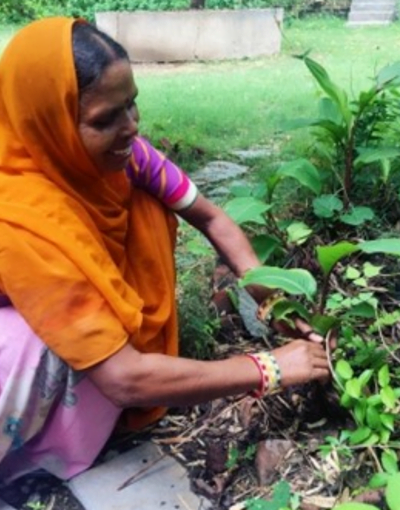 Tamu Bai is a female Guni in her late 40s. Her father, mother, grandfather and grandmother were traditional healers. She started learning this ancestral knowledge at age 15 in between household work while her brothers were studying in school. Even today, she is illiterate and can only write her name because she learned the shapes of those letters in the mud. She was married at age 18 and began formal Guni training with her grandfather shortly afterward. Her husband, a farmer, was supportive of her lessons and learned about medicinal plants by collecting the plants and mixing them together for her. Tamu Bai learned about bone setting from her grandfather, as well as treatments for jaundice, fever, hemorrhoids,  leukorrhea, menstrual pains, vomiting and diarrhea. She learned about traditional midwifery from her grandmother and along with working as a traditional birth attendant, treats prolapsed uterus as well.

Tamu Bai already had 25 years of experience working as a Guni in her village when she joined JJVS at age 40. After receiving training in Myotherapy, she has been able to treat more patients and receive a greater income for her family of 6 children. She is currently training her daughter to become a Guni so that she will also have a source of income once she is married. While allopathic care is available in her village, it is very expensive. She has noticed that more people are seeking her out for treatment due to the publicity she has received from JJVS and the success of local health camps. Various women are also interested in receiving training from her now that JJVS has recognized and encouraged Guni work as a professional pursuit. However, it has become difficult to find the medicinal plants of her ancestors because of decreasing biodiversity in the forests.

Working as a Guni has boosted her confidence and self-esteem. People come from many different areas to ask her about their illnesses, and she feels internal satisfaction in seeing her knowledge used for the betterment of her people. She sees around 20 patients per week, most of whom are women. Younger women especially are very hesitant to receive treatment from elderly male Gunis and talk about their health problems. As an adolescent girls, she too was shy and only asked her mother about women’s health issues after marriage and childbirth. At times it was challenging to work as a Guni while raising her 6 children, but her mother used to help her, and her village saw no issue in her traveling for health camps and trainings. Tamu Bai hopes that in the future there will be more Gunis so that her profession becomes a viable and prominent healthcare option in rural areas